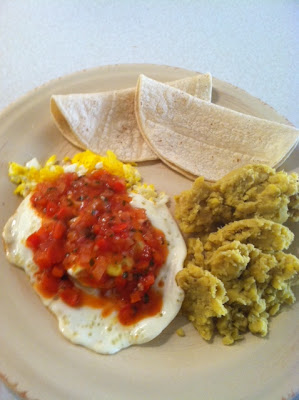 It’s Sunday. And I woke up with a craving for some Dominican style eggs, like my grandmother used to make back when she was alive and chasing my demon child ass around her house with a thick, rubber soled slipper firmly clenched in her hand.

The smell of those eggs in the morning would always stop me in my tracks. As I vowed, with fingers crossed, to stop engaging in fun-to-do-hoodrat-stuff behavior. My fave cousin and I would sit at the table like two slovenly little angels savoring that plate of mouth watering deliciousness. Until breakfast was over, and we'd regroup, hatching our next brilliant scheme to torment the old lady.

We were bored. And poor. Our options for entertainment were very limited.

Now, I wouldn’t call myself a “cook”. (this is where my tiny Rican mom rolls her eyes). But I can follow a recipe easy enough. And it so happens that I am also a gluttenous pig who REALLY, TRULY, DEEPLY LOVES TO EAT. The desire to stuff my face with something sinfully decadent will motivate me on occasion to pick up a seldom used pan. Also, I am poor. With limited options. I need to start cooking. Or starve.

So, here's what went down this morning in the Mad Shady kitchen:

These are actually two separate recipes: one for the eggs and one for the mangu. Because my gluttenous Dominican half decided that I needed authentic Dominican mashed plantains to go with my Dominican style eggs. Also, I had mine with toasty corn MEXICAN tortillas. It just felt right. Plus they were in my cabinet.

I made a few modifications...

MANGU:
I cut the recipe in half, because I live alone, and I am not trying to feed the neighborhood. Also, I took one tbsp of olive oil and sauted some garlic in it. Then I added that with the remaining plain olive oil to the plantain mixture (I used two tbsps total of oil. Because half of 1/4c=2 tbsps. I googled it).

EGGS:
I cut the recipe in half.

Also, I only used 1/4 red onion, even less of red pepper, just said no to green pepper, just a sprinkling of cilantro, no salt or pepper (prefer to let my imaginary friends add their own to suit their tastes) and said no thank you to parmesan cheese. I also minced the onion and peppers to an inch of their lives. Because I'm lazy. And I don't like to chew. I used less water, even less than the 1 cup I would've used by cutting recipe in half. And I added two tsps of cider vinegar. My grandmother's secret ingredient! (Oh yeah, Abuela, I paid attention). You can certainly add more water after it simmers, just have to play around with it. I don't like it too watery. So I'd rather add it at the end. You'll know you've nailed it, when the taste makes you stomp your foot, yell out DAY-UM to the heavens and then erupt into a joyous song. 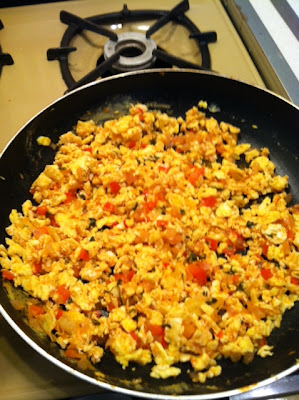 Tell me that don't look good! One con: No dipping with this version. Keep that in mind.

--DO break the yolk, mix it with the sauce and try a mouthful with the plantains
--DO try the sauce with just the plantain. Do it! You. Will. Not. Be. Sorry.
--Maybe try the eggs folded up in the tortilla? Why the hell not?
--Have you tried adding a slice of avocado? You are a TRUE Dominican, now. 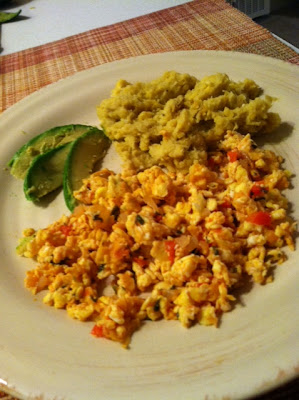